Guaan is the largest desert on the planet. Though several areas of the world remain unexplored at the time of writing, its absolute vastness makes this fact indisputable.

Exploration efforts currently are focused on lands across seas, for they bring promise of new discovery more readily than the infinite unchanging sands of Guann. Most maps only document the civilised regions, the major Oases and significant landmarks. 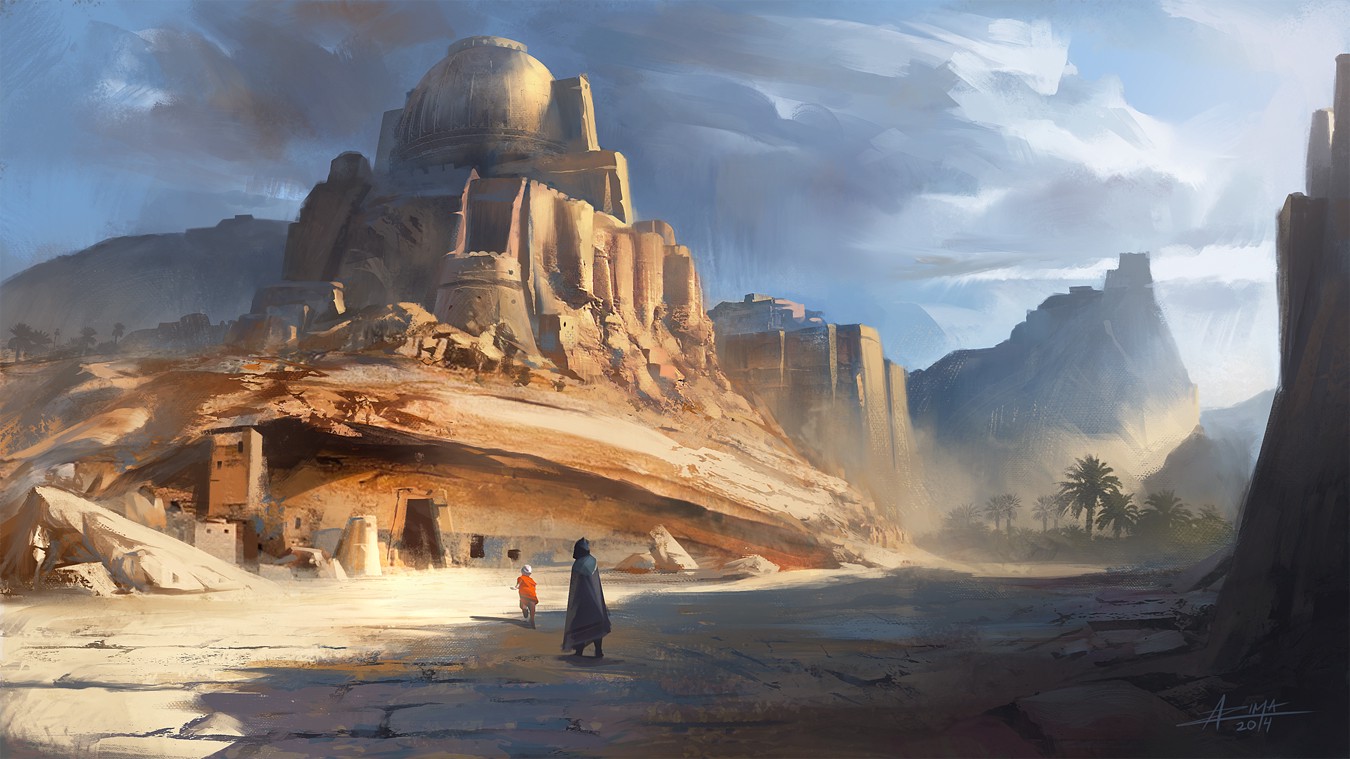 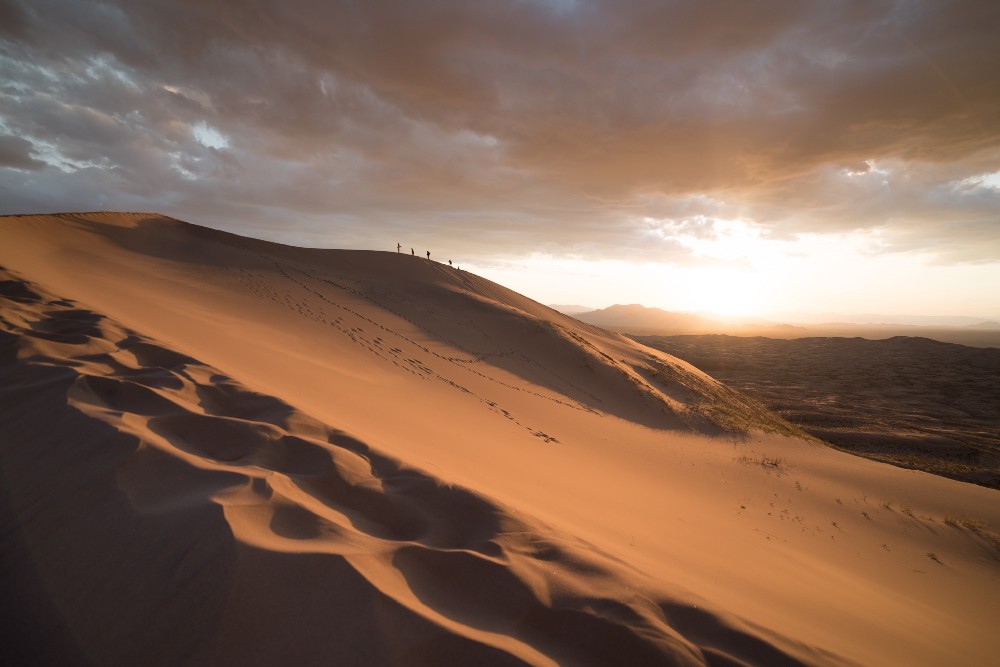 Some nomads thread the crest of a sand ridge

There are many worrying tales that come from the wild desert. Tales of horrific creatures, mysterious structures and unknown beasts often come back from the exiled and from decimated nomadic tribes. Official comments have repeatedly blamed the Guaan’s mirages and travellers becoming hallucinogenic. While many reports may be tales as tall as a sailor’s, it would be unwise to assume there is nothing else out there.

Within Guaan there lies several provinces, each controlled by a separate power. Varying treaties across the years have lain these lines, but Guaan has never in written history been at peace. The territorial lines warp constantly. Most maps have common regions of internal dispute attributed to neither country to keep up-to-date for longer.

The Northern part of the area is traditionally the arena where most battles are fought, as this is the only region where countries border. Along that Silv-Serret border lies high concentration of oases, which are of significant tactical and economic interest. Over the many years of fighting, motivations have become less about resources and have mostly been continued by the racial tensions passed down from previous generations who fought each other.

The Southern borders are more stably defined. Population numbers inhibit much expansion, so conflicts are rare and while matters of ideals may differ — the land is mostly at peace. The most recent conflict to involve these countries was caused by the encroachment of the human empire of Riddea, strongly opposed by a united force of the native inhabitants. After several years of attrition, eventually the humans were given the Eye of Guann, a separate sand island, as a truce offering. The selection of this area an astute political move designed to inhibit the human’s tendency to argue trivialities of borders, moving slowly out seemingly unnoticed. 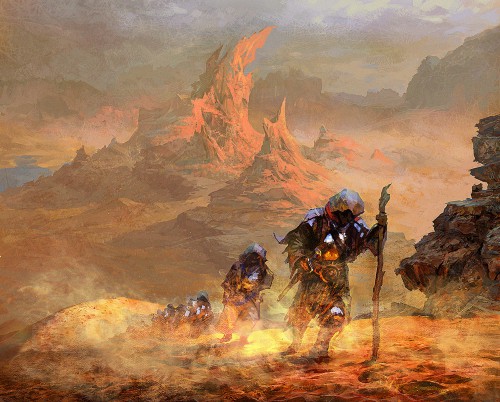 Despite the heat, Nomads wear many layer to defend against the harsh sand-hurling winds

Over 100 different nomadic tribes wander the central part of the desert. Able to sustain themselves through clever navigation and inherent resilience. Many feed on lizards and small desert herbs — both of which have intensely strong flavours, but they are generally the only reliable source of sustenance.

Over the course of a year, many things will affect the nomads. The warring states grasp for resources, the peak of summer’s heat and the animal population all affect their population. On particularly harsh years, entire tribes have been wiped out.

The sands in Guaan vary by region. Their colour can range from brilliant salt-like whites and violent reds, the familiar gold, war torn blacks or even dunes of desert glass. Their consistency differs also — when the southern winds blow, a sandstorm will take on the qualities of the sand it raises — a fine silken mist, sharp cutting swings or harsh grating walls. In certain areas that line the coast, odd coloured beaches can be seen — discoloured from ore grains washed ashore. 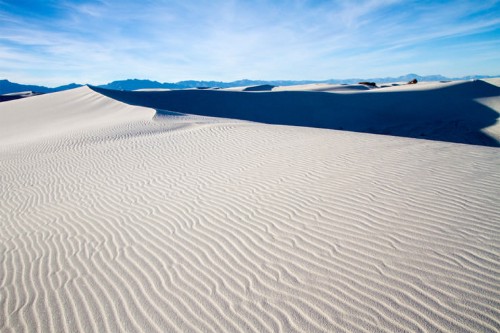 A common theory is that there once was several deserts where the Guaan now lies. After several years of erosion and environmental decay, they slowly crept towards one another, until eventually they encompassed the large expanse they do today.
This theory is supported by the occasional discoveries of ruined civilisations under the sands. Many of which contain old farming implements, seed remnants from more fertile lands and remains of more fragile animals.

Sandstorms are the main environmental hazard in the Guann, but they are not alone — sinkholes, weak undergrowth and the seldom eruptions of gas from the earth often take lives of anyone not fully concentrating on their path.

The central part of the desert is both the hottest and most inhospitable area of the desert. There have been no successful journeys through the area, so most knowledge is conjecture based on the little we have seen.

In the harsher months, animal inhabitants will venture towards civilised areas in their desperation for food. Recently the threat of these attacks have been almost removed due to advances in city guard armouries.

Compared to many regions across the continent, the cities of Guann are wealthy — benefiting hugely from trade from one side to the other. This advantage is at risk however, as human influence increases on both sides, they will inevitably want to control the connecting paths also.

Guann has a rich selection of cultures, but this too is changing as globally cities expand exponentially. Demand for certain goods such as silk and spice is beginning to overwhelm maximum possible production. Many similarities can be drawn to the early rush for steel, where once it was produced in a simple bloomery, now produced in systems twenty times its size and manned by several men. It may be an inevitability that these trades too may vanish in the coming years.

However, even if the large desert cities retreat and the capitals’ money runs dry, the nomadic tribes will still persevere, ever wandering as they always have.