Common knowledge dictates that miasma seeps into the world from an area know as “the Mig” — an unseen inter-planar region that acts as cartilage in a universal skeleton. However, as the area is inaccessible to any planar denizens such as ourselves, any knowledge is almost entirely theoretical and its existence is regularly contested.

The extent of our knowledge about The Mig only comprises of its intense concentrations of miasma. Many believe it is the only thing that exists there — constantly in turmoil from currents forced by the shifting of planes. As it presses against our own plane, the power is often transferred into our own lands.

Those talented enough — or rich enough — to be able to manipulate the energy can channel its raw force in what is commonly referred to as magic. Despite fantastical tales of magical novel page-turning and the like miasma “magic” is based on sheer power —delicacy is impossible.

The Mig was originally a tale passed down generation by generation, but confirming evidence has only been established in the last 200 years. When two planes connect to form a planar sear (or rift, as it is more commonly known) there is a transfer of energy between planes. Miasma is amongst these energies. It was found that the transfer of planar energy is unequal. the sear increases the total amount of latent energy, though one side may seem to be reduced. This led to the popularization of the traditional theory of an intermediate source of energy. There is great contention between scholars in attempts to artificially induce sears to further research the phenomenon as many fear it may potentially affect the balance of planar energy with unknown consequences. 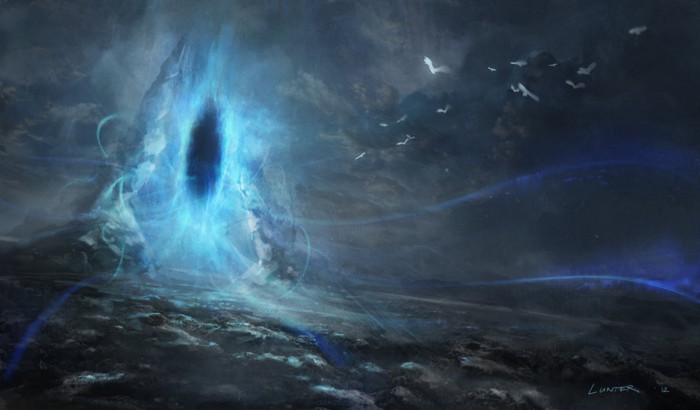 A planar sear bound to a stone archway

Areas with consistently high concentrations of miasma sometimes have permanent sears which attach themselves to the landscapes of both planes. These are known as planar gates and are heavily contested for political, strategic and research advantages. Though the gates may seem permanent, at any moment they may close without warning and never regenerate again. They may also bind themselves to inconvenient locations that may not be usable by full sized humans.

Miasma pools often attract creatures of unnatural origin— creatures born by magic’s kindling or developed under its warping influence. Many of these often-malformed creatures cross over to the other realm and die from the shock of a new atmosphere, leaving many mysterious corpses littered around rift entrances and many other mysterious eyes guarding its grounds.

With the advent of industrialization, research efforts are expected to accelerate in the coming years, hopefully bringing new information to light about this mostly unknown area.